Ahead of the resumption of the 2021 Indian Premier League (IPL 2021) in the United Arab Emirates, the Kolkata Knight Riders (KKR) were in disarray. With only two wins in seven matches, the KKR were reeling at seventh position in the table. Mumbai Indians, the side fourth in the table then, had eight points in seven matches. With a poor Net Run Rate (NRR) of -0.494, the Knight Riders were closer to the bottom of the table than the top-4.

On October 8, however, the KKR secured the fourth and final berth of the playoff stage with Rohit Sharma‘s MI failing to catch up with Eoin Morgan‘s side due to an inferior NRR.

In their remaining seven games of the season, the Knight Riders scored 10 points for an incredible turnaround. The side which had been struggling with inconsistent performances ever since its last IPL triumph in 2014Â will now take on MS Dhoni‘s Chennai Super Kings in a bid to match their title count.

We take a look at the factors which led to this remarkable comeback.

A breath of fresh ‘Iyer’ Iyer has been the find of this season –Â not only for the Knight Riders.Â As it turned out, Team India also roped in Iyer as net bowler ahead of the 2021 T20 World Cup, scheduled to take place in the UAE and Oman from Sunday.

The 26-year-old turned heads with consistent outings for the KKR with both, bat and ball.Â

After the Knight Riders failed to reap rewards with the decision to playÂ Andre Russell primarily as a batterÂ in the Indian leg of the tournament, the team management decided to do away with an extra bowler and replace Shivam Mavi with an opener who could also be called upon for a couple of overs. This allowed KKR to also utilize Russell’s bowling skills.

Most runs in UAE leg so far


Against the Royal Challengers Bangalore, Andre Russell breathed fire as heÂ returned figures of 3/9 in three overs, while Iyer remained unbeaten on 41 to secure a dominant nine-wicket victory for the side.

Iyer is currently the second-highest scorer in the UAE leg of the season (320 runs in 9 matches at a strike rate of 125).

As the season entered the business end of the league stage, the 26-year-old also contributed with the ball, ending with figures of 2/29 against Delhi Capitals in a win that effectively sealed a top-4 spot for KKR. 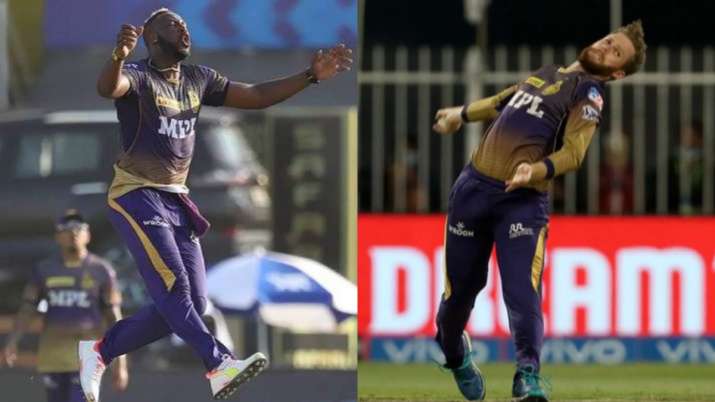 During the side’s loss against Chennai Super Kings in itsÂ third game of the UAE leg, KKR faced a setback as their flamboyant all-rounder Andre Russell suffered a grade 2 hamstring injury. The side called upon Tim Southee as a replacement, who eventually filled in for Lockie Ferguson, after his fellow Kiwi teammate was ruled out with injury as well.

Even as Eoin Morgan struggled to put runs on the board, seasoned campaigners like Dinesh Karthik and Sunil Narine stepped up for the side in absence of their star players. While Karthik played cameo roles in the lower-middle order for the side, the West Indian NarineÂ playedÂ the role of a finisher, slammingÂ 50 runs in five innings at a strike rate of 166.66, including two unbeaten knocks. With the ball, Narine enjoyed a stellar run, picking up 11 wickets in the UAE leg with an impressive economy rate of 6.19.


A significant contributionÂ from Narine came in the eliminator stage of the seasonÂ when he scored 26 off just 15 deliveries to take KKR to a three-wicket victory in a low-scoring run-chase.

Varun Chakravarthy, meanwhile, remained consistent throughout the UAE leg, bowling at an incredible economy rate of 5.30 for his 11 wickets in nine matches.

Towards the business end of the league stage, the side also drafted in Bangladesh’s Shakib Al Hasan for his all-round abilities. “Shakib is always in the mix when you talk about selection. His skills set with left-arm bowling and batting, we consider him as top 3 batters but definitely, he can fit in the middle order somewhere,” McCullum had said about the Bangladesh all-rounder ahead of the side’s game against Sunrisers Hyderabad on October 3.

Shakib did return to the side and bowled an economical spell, registering figures of 1/20 in four overs. He has since played in all of KKR’s games so far.